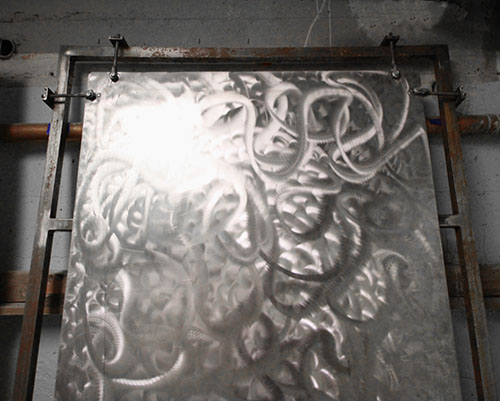 Plate reverberation is a term used to describe a physical technique for re-creating room ambiance in a recording by vibrating a steel plate.

Recording studios in the pre-digital era could use a plate reverb to emulate the sound of a large, resonant room. In this way, a small studio could make it seem as if elements in the mix may have been recorded in a cathedral, for example. Plate reverb is achieved by driving the desired sound signal through a tensioned sheet of thin plate steel and capturing the reflections in the metal with a contact microphone. Imagine a trampoline made out of sheet metal, where the sound is propagated through it by a speaker driver and then the metallic vibrations are captured by a type of microphone which works similar to a doctor’s stethoscope touching the sheet as if listening for its “pulse”.

When I first started recording in the mid 90s, it was all about the cassette four-track. In my case the venerable Tascam 424 Portastudio was my tool, a device on which I recorded several local Victoria bands, the most notable of which  being Hot Hot Heat which lead to their first 7″. Somewhere between coming up in a pre-plugin era and having a deep love for all eras of older music, I became interested in the ambience and effects of the pre-computer audio age. Plate reverb became a fascination to me as I understood the concept and I had a notion of the character having heard modern digital replicas and identified that sound in classic recordings from the 70s and 80s. The original, commercially made plates, like the EMT 140, were far too expensive for me to purchase so, having dabbled at audio electronics for quite a while, I decided a few years ago to embark on a monumental project: to build a plate reverb. This project first came to my attention via my favourite magazine, Tape Op, and I followed some thread that I found which was similar to this.

My friend Colin McCrae was a metal artist and musician so he was a natural first person to contact about the project. He built the frame out of square tube steel which you can see in the image above. Living on an island hinged on the West Coast, our resources are a little more limited and I could not find the 1/64″ plate steel which matched the EMT spec. The closest we could source was 1/40″ and it was galvanized to boot (meaning it had an unwanted layer of zinc on it to prevent rust). I pulled the trigger, bought a sheet and sent it to Colin. He tack welded washers to the edges so that when tensioned, the incredibly thin metal (though not as thin as we had wanted!) would not tear. He also buffed off the zinc which lead to the beautiful patterns on the sheet that you can see in the photo. I then tensioned the sheet using threaded hooks and a ratchet only to find that the plate would actually bend the hooks into straight rods! Next I purchased threaded shackles like the devices used for sailing rigging. These handled the tension, but a new problem arose… the tension bowed Colin’s frame in on every side. At this point I decided that we would live with this distortion as this was indeed a prototype. I ran a loop of a snare drum off my Roland TR-707 through the plate and slid the contact mic around the sheet until I found a sweet spot (to my ears). I epoxied the mic to that location.

The driver was purchased from a company which produces audio components for boating – this driver was meant to be screwed to the inside of a boat frame and turn the boat itself into a speaker since boats have limited room for inset speaker cones! I later had my friend, Anthony, build a 4 channel impedance buffer as the piezo contact mic was 1M ohm and needed to be matched to a mic preamp (which are usually topping out at 10k ohm). I drive the plate with a run-of-the-mill Technics home stereo amplifier.

How does it sound? Well, not really too much like a room, but even a well tuned EMT 140 is not really a room sound. I would put it somewhere between a hall reverb and a device that blows up dominant frequencies and overtones – but I really like it! It adds incredible harmonic richness and is especially sweet on backing vocals, brass instruments, synths and anything that a mixing engineer would consider a ‘pad’ sound. It’s a good way to add pillowy thickness and related harmonic content. The decay is in some ways more like a real reverberant space than traditional plate reverbs because the 1/40″ steel is more resistant to impulse than a thinner sheet.

A few years later, I built a second plate reverb thanks to help from my friend Jim Madsen, who built a more robust frame. My cousin-in-law, Spencer, sourced 1/64″ plate steel and I was on my way to a new and improved model. That frame also bent under the pressure and the 1/64″ plate tore in two places because it simply could not handle the tension, but I’ve worked around these issues and use it on virtually every recording. It has a much longer decay and a vastly different character from the first unit.  I tend to use both in tandem, panned fairly wide, on pad sounds in my mixes these days. One of the most interesting characteristics of real plate verb versus a plugin is that the input gain, that is, how hard I hit the plate with signal from the volume on the Technics amp feeding them, dramatically changes the harmonics picked up at the mic. Hitting the plates hard invokes the resonant nodes they inherit from how I’ve tuned them via a ratchet. The original 1/40″ plate has fewer tensioning points and curiously develops resonant ring in the longer spaces between the shackles. When I want them to sounds as much like a cathedral as possible, I turn the input gain as low as I can use a preamp with as much clean gain as possible to pick up the subtle, quiet sounds.

Was it worth it?

Well, I plan to one day build a third. I use them in virtually every mix. I need to complete my 4 channel spring box first…